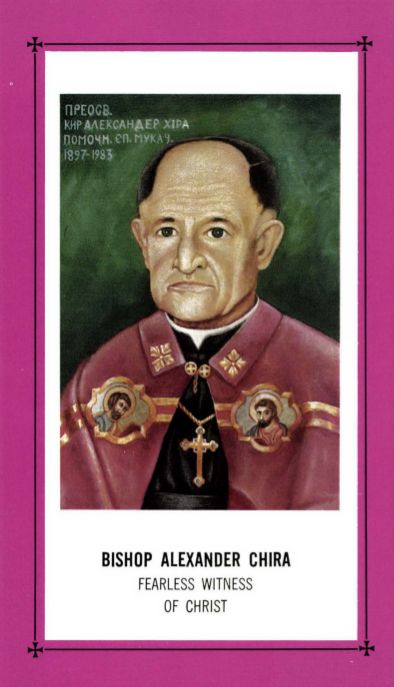 “I bequeath my body to the earth, my spirit to God, but my heart I leave to Rome!” Bishop Chira

On May 26, 1983, the worthy successor to our martyred Bishop Theodore G. Romzha, Bishop Confessor Alexander Chira, passed away in exile. He died far away from his native land, in Karaganda, Kazakh, S.S.R. He was one of the many victims of the Soviet persecution of the Greek Catholic Church in Subcarpathian Ruthenia. Bishop Chira served a long prison sentence in the concentration camps of Siberia. He was even forbidden to return home and was forced to live in exile.

Since five years have passed since his death, we are able to also consider the cause of his beatification. Thus his name can be added to the list of our other three saintly Bishops, Paul Gojdich, Theodore Romzha and Basil Hopko, who died as the fearless witnesses to Christ.

1. Bishop Alexander Chira was born to a large priestly family on January 17, 1897, in the village of Vulchivc’i, Maramorosh District. He completed his theological studies at the University of Budapest with a master’s degree in Sacred Theology, and was ordained priest in Uzhorod, December 19, 1920. He spent the fi rst two years of his priesthood as an assistant at the Bishop’s residence. Later he was appointed to do pastoral work in his native Maramoroschina, which was at that time threatened by Orthodox propaganda.

In 1924 Father Chira succeeded the late Bishop Basil Takach as Spiritual Director at the Eparchial Seminary in Uzhorod. At the same time he became Professor of Church History and Canon Law. As a gifted orator he soon became a favored preacher at the Uzhorod cathed ral , attracting people from distant places. He was nicknamed-the Evangelist. To counteract Orthodox propaganda among the people, he initiated the Missionary Society of St. Josaphat, promoting popular missions and retreats. Among the youth he advanced the Sodality movement. For the sick he organized the so-called Apostolate of Suffering. As a voluntary prison chaplain he became instrumental in providing the Uzhorod penitentiary with a chapel and took care of the spiritual needs of the inmates.

During the Easter vacation Father Chira regularly visited the mining districts of France and Belgium, bringing spiritual consolation to thousands of Ruthenian workers. In the event of some serious misfortune it was Father Chira who was sent by the Bishop to comfort and to encourage the poor victims. He also took an active part in the ecumenical movement of SS. Cyril and Methodius, which was then initiated in Velehrad, Moravia. For his dedicated work he was soon regarded with the title of Consistorial Counselor, then again with the dignity of a Papal Chamberlain. In 1934 Msgr. Chira was elevated to the dignity of Canon. At the same time he was appointed Rector of the Seminary and Professor of Moral and Pastoral Theology.

2. In the summer of 1939, following the Hungarian occupation of Subcarpathian Ruthenia, Msgr. Chira was removed from his post of Rector and was placed under house arrest. Eventually he was freed from Hungarian police surveillance and, under the influence of the Holy See, he was permitted to continue his work as Professor of Moral and Pastoral Theology at the Seminary. For his gallant stand ag ai nst the Hungarian pressure, the Holy See rewarded him, in 1943, with the high distinction of Domestic Prelate, a rare honor among the Ruthenian clergy at the time.

It was a heroic act on the part of Msgr. Chira to accept the episcopal ordination under those adverse conditions. But he did not hesitate and dedicated himself wholeheartedly to the defense of the Mukachevo Eparchy and its faithful against Soviet persecution. When the Soviet secret police began to harass him, his relatives suggested to him to leave the country. But Bishop Chira had only one answer : ” I am a priest (even his relatives didn ‘t know that he was ordained a bishop) and my place is here, at home, with my people. Let God’s holy will be done!”

After Bishop Romzha’s violent death the Soviets promised Bishop Chira to make him a Bishop if he would bring the Eparchy of Mukachevo under the jurisdiction of the Moscow patriarch. His answer was decisive: ” I was born a Greek Catholic, and I also want to die a Greek Catholic!” During the night of February 10, 1949, the Soviets incarcerated Bishop Chira, took him to L’viv Galicia, where they tried him for “sabotage and slander against the Soviet Union.” When they learned that Chira was secretly ordained a bishop, they tried him again in Kiev for ” treason.” As a “traitor of the Soviet Union” he was sentenced to 25 years of imprisonment with the loss of his civil rights.

3. After the trial Bishop Chira was deported to the Irkutsk labor camps, near Lake Baikal, in Central Siberia. From there they transported him to the Kuznets mines near Kemerovo, in the Novosibirsk District. Finally they herded him with the other prisoners into a labor camp on the Irtysh River, in the Omsk District, where he continued to work in the coal mines.

In 1956, after Stal in’s death Khrushchev granted general amnesty to all ” political prisoners,” in which category all the Byzantine Catholic priests were included. In September, 1956, Bishop Chira was released from prison and returned to his native village, Vulchivc’i, where he secretly continued his pastoral work. During the Christmas season of 1957, he was apprehended by the Soviet police and sentenced to five years of forced labor with the injunction never to return home. This time he was deported to the mining labor camps near Karaganda, Kazakh, S.S.R., in Central Asia.

Upon the completion of his second sentence, since he was not allowed to return home, he settled down in Karaganda, taking spiritual care of numerous Catholic Exiles in that area. One of the German settlers, who was fortunate to return later to West Germany, writes:

” Father Alexander lived in the most adverse circumstances, being placed under close surveillance of the local police and forbidden to do pastoral work among the people. Often late at night the security agents summoned him for hearings, each time molesting him for hours. But he did not give up. Under the cover of night he continued to celebrate the Liturgy, hear confessions, baptize children, marry young couples, and take care of the sick and dying. The people came from far away places, traveling hundreds of kilometers, just to receive the Holy Sacraments from his hands.

4. In Karaganda for a long time nobody knew who Father Alexander really was. It is customary not to mention the full name of an underground priest. When the news spread that there was a Catholic priest living in Karaganda, many German exiles settled down in th is fast growing mining town. Soon the Catholic community of Karaganda was increased by numerous exiles from Lithuania, Poland and Ukraine. Many of them were also from the Carpathian region . It took them more than twenty years to obtain an official registration as a Catholic community under Soviet law, but their efforts were crowned with success.

At last in 1977, the Catholic community of Karaganda was officially recognized as a parish and Bishop Chira was permitted to act as its first pastor. He was already 81 years old. And yet he helped to organize other parishes among the Catholic settlers in Central Asia. At the present time there are at least 12 registered Catholic parishes in Kazakh S.S.R .

The Karaganda community, encouraged by Bishop Chira, built their own church which he blessed on Christmas day, 1978. On that occasion Pope John Paul II sent them his Apostolic Blessing. When Bishop Chira read the Holy Father’s telegram, all the people in the church cried for joy, and he cried together with them. An old lady writes from Karaganda: ” On Sundays our church is always filled to capacity. Even those who once did not want to hear anything about religion are being touched by grace and start to come to church .”

5. As he reached his 85th birthday, Bishop Chira appointed as his successor Father Albinus Dumbljauskas, S.J., an exiled Lithuanian priest. On that occasion Bishop Chira wrote : “I do not feel 85 years old, since the enthusiasm of the faithful, which equals that of the first century Christians, makes me forget that the course of my life is swiftly approaching its end.” The Holy Father, informed about. the dedicated work of Bishop Chira in Kazakhstan , sent him a congratulatory telegram and assured him of his personal prayers.

In the fall of 1982 Bishop Chira’s health began to fail. That winter he caught a cold which eventually developed into pneumonia. The X-rays showed that both of his lungs were covered with bleeding caverns and the doctors were not able to stop his internal bleeding. In his last letter, dated May 3, 1983, our brave Confessor wrote : ” I am constantly spitting up blood and the doctors are unable to stop my internal bleeding. In a word, the sunset of my earthly life is at hand. In case this would be my last letter, then you must remember that I am most grateful to my beloved Savior for all His blessings which He so lavishly showered upon me during the long journey of my life, coming to an end in Karaganda. I am especially grateful to God for the grace of perseverance in faith, making my own the words of that great Irish confessor, Daniel O’Connell: ‘I bequeath my body to the earth, my spirit to God, but my heart I leave to Rome!’ Yes, with the last breath of my life I want to profess my complete fidelity to the Vicar of Christ on earth, Pope John Paull!.”

Bishop Alexander Chira died in exile as a true Confessor of the faith . He peacefully passed away in his sleep on May 26, 1983, and was buried by the wall of the church he helped to build . Over his grave the grateful parishioners of Karaganda erected a beautiful monument. On our part we will remember him as an outstanding son of our people, a fearless witness of Christ, and we will continue to pray for his glorification.

Summoned by the Soviet secret police, Bishop Chira was told to bring the entire Eparchy of Mukachevo into the fold of the Russian Orthodox Church. He firmly refused. He was promptly condemned for ” Sabotage and slander against the Soviet Union” to 25 years of forced labor in Siberia. Later he was condemned to an additional 5 years of hard labor for his underground pastoral work and was forced to live the rest of his life in exile. In spite of his unbearable sufferings and humiliations he remained faithful to Christ and His Church . He died as our modern Confessor of faith.

O gracious Lord, in Your infinite wisdom You cal led our Byzantine Catholic Church to give heroic witness to the unity of Your Church, founded on the rock of St. Peter. Among many valiant witnesses You also called our fearless Confessor, Bishop Alexander Chira, who in the adverse conditions of forced labor and lifelong exile ” fought a good fight , finished the race, and kept his faith” (2 Tim. 4:7) . We humbly ask You to glorify Your faithful servant, Bishop Alexander, in heaven and through his kind intercession grant us . . . (here make your request). For you are a merciful and gracious God, and we render glory to You, Father, Son and Holy Spirit, now and ever, and forever. Amen.